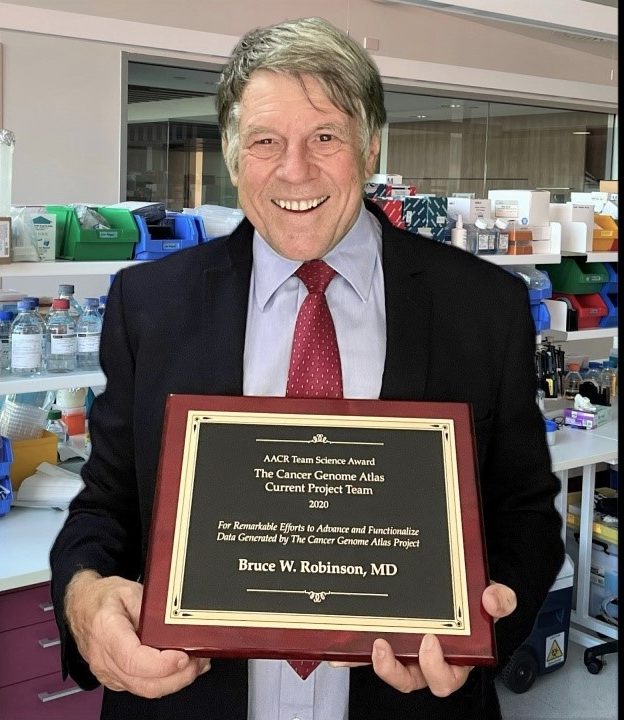 Professor Bruce Robinson recently received a prestigious award (and a rather hefty parcel containing it). Bruce is pictured here with the plaque from the US announcing him as a recipient of a Team Science Award for 2020 from the American Association for Cancer Research (AACR), one of the world’s leading cancer research bodies.

This award was made to the leaders of the The Cancer Genome Atlas (TCGA), which brought together researchers from diverse disciplines and multiple institutions to create a detailed catalogue of genomic changes associated with different types of cancer to improve the prevention, diagnosis, and treatment of cancer. As co-chair of the Mesothelioma Program, Bruce was involved in planning input and co-leadership of a large and diverse group of international clinicians and scientists, which included NCARD’s Professor Jenette Creaney. The work led to a seminal paper and has already generated 20 or so additional publications that used the data from that mesothelioma program. The Cancer Genome Atlas’s mesothelioma project was an international collaborative effort of the TCGA led by senior scientists from the Wellcome Trust Sanger Institute, and the University of Western Australia, a reflection of the international recognition of the expertise at this university.

The Cancer Genome Atlas Program began in 2006 and ran for twelve years. It involved contributions from 11,000 patients and thousands of scientists, and is rightfully described as having “produced a rich data set of immeasurable value”. Read more here

Congratulations to Bruce for having his key contribution to this work recognised.